The greatest diamond find in more than a century — the 1,109-carat gem-quality "Lesedi la Rona" — is expected to fetch at least $70 million when it goes under the hammer at what promises to be an electrifying stand-alone sale at Sotheby's London on June 29.

The $70 million figure would set a record for the highest price ever paid for a gemstone at auction, surpassing the $48.5 million achieved by the 12.03-carat Blue Moon of Josephine diamond at Sotheby's in November of 2015.

In its current rough state, Lesedi La Rona is the size of a tennis ball. When cut and polished, it could yield a D-color diamond weighing more than 400 carats. The current record for the largest top-quality faceted diamond in existence is held by the 530.20-carat Great Star of Africa, which was the largest of nine diamonds carved from the legendary 3,016-carat Cullinan Diamond more than a century ago. The Great Star of Africa is now part of the British Crown Jewels. 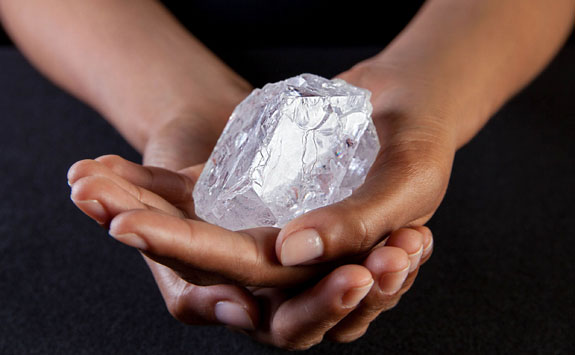 Unearthed by Lucara Diamond Corp. at its Karowe mine in Botswana in 2015, Lesedi la Rona means "Our Light" in the Tswana language spoken by the Botswana people. Sotheby's is calling Lesedi la Rona "The Diamond of a Lifetime."

When we first wrote about Lesedi la Rona in November 2015, Lucara had reported its weight to be 1,111 carats. The new weight of 1,109 reflects a loss of 2 carats during the cleaning process, which is normal, a Sotheby's spokesperson told NationalJeweler.com.

According to the Gemological Institute of America, the Lesedi la Rona’s “top color and transparency exemplify the 'limpid' appearance commonly associated with Type IIa diamonds” – a rare and coveted subgroup which comprises less than 2% of all gem diamonds. Stones in this group are “the most chemically pure and often show extraordinary optical transparency."

Independent reports on the potential yield of the rough have stated that the Lesedi la Rona may have the potential to yield the largest top-quality diamond that has ever been cut and polished.

“The Lesedi la Rona is simply outstanding and its discovery is the find of a lifetime," commented David Bennett, Worldwide Chairman of Sotheby’s Jewelry Division. "It is a huge honor for Sotheby’s to have been entrusted with its sale. Every aspect of this auction is unprecedented. Not only is the rough superlative in size and quality, but no rough even remotely of this scale has ever been offered before at public auction.”

The Lesedi la Rona will be on view at Sotheby’s London from June 18-28, ahead of its auction in the evening of June 29.