The 18.4-carat “Rockefeller Emerald” set a new world auction record for the highest per-carat price ever achieved for an emerald when it fetched $5.5 million yesterday at Christie's New York, which is headquartered, quite fittingly, in Rockefeller Center.

Described by Christie's as possessing mesmerizing color and impeccable clarity, the Colombian emerald was originally purchased in 1930 as part of a pendant brooch by John D. Rockefeller, Jr., for his wife, Abby. After Abby passed away in 1948, Rockefeller asked New York jeweler Raymond C. Yard to disassemble the Van Cleef & Arpels brooch so the individual emeralds from the setting could be distributed among the Rockefeller children. Yard set the center emerald in a platinum ring and Rockefeller gifted it to his son, David. 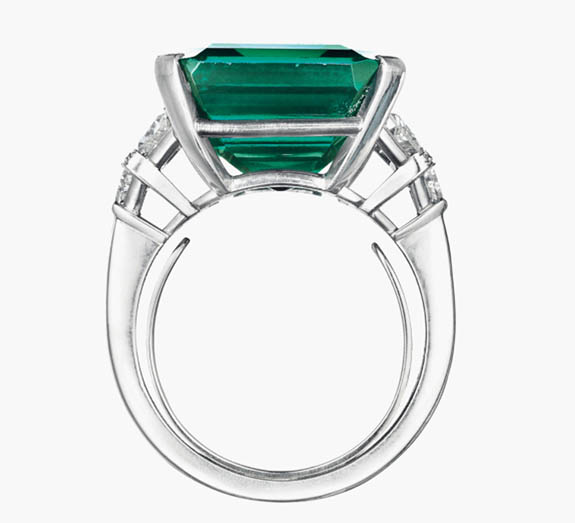 "This is supremely natural beauty," Rahul Kadakia, Christie's International Head of Jewelry, told CNBC. "This truly is the finest emerald that's ever come up for sale at auction, or anywhere else in the world."

The ring features the octagonal step-cut emerald flanked on either side by trapezoid and circular-cut diamonds.

Christie's noted that the intense color and distinct saturation that typifies a Colombian emerald is illustrated perfectly in this remarkable stone. American Gemological Laboratories described the stone as "exceptional," possessing what AGL calls an "unusual combination of size, provenance, absence of treatment and quality factors [that contribute] favorably to its rarity and desirability."

The Rockefeller Emerald's per-carat price of $304,878 edged out the $281,329 achieved by the previously record holder — a 23.46-carat emerald-and-diamond pendant brooch formerly owned by actress Elizabeth Taylor. That Bulgari brooch was sold by Christie's New York for $6.6 million in 2011 as part of the landmark auctions of “The Collection of Elizabeth Taylor” and still claims the record for the highest price ever paid for an emerald jewel.

Members of the Rockefeller family are often characterized as American royalty. John D. Rockefeller Jr. was the only son among five children of Standard Oil co-founder John D. Rockefeller, America's first billionaire. During the Great Depression, "Junior" developed Rockefeller Center, an impressive complex of midtown Manhattan office buildings, which he called the "city within a city."

"It's very, very cool that we have this city within a city, selling the stone that belonged to the man who built it," Kadakia told CNBC.