The 7.45-carat diamond engagement ring that presidential candidate Donald Trump gave to second wife Marla Maples in 1991 is heading to the auction block in New York. After their divorce in 1999, Maples sold the ring at auction for $110,000. On Wednesday, the same ring is expected to fetch $300,000 to $350,000. 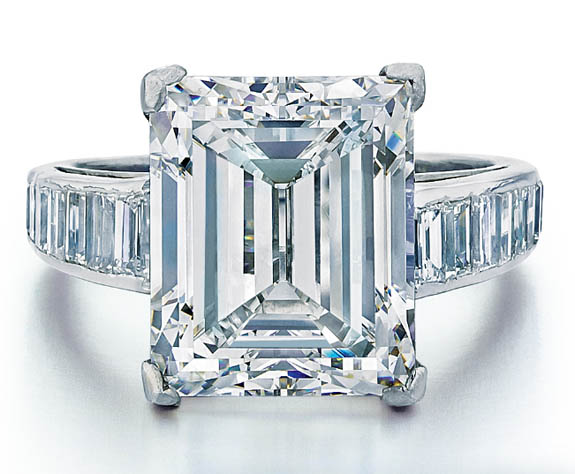 The platinum ring by Harry Winston features an F-color, VS1, emerald-cut center stone in a four-prong setting. The sides are channel set with 16 baguette-cut diamonds.

In 1999, Maples entrusted the sale of the ring to auctioneer Joseph DuMouchelle. At the time, the ring was sold to an anonymous American couple, who have watched the ring triple in value. On Wednesday, DuMouchelle will auction the ring for a second time at the Lotte New York Palace hotel.

Contributing to the value of the Harry Winston ring are multiple levels of provenance.

"It’s interesting when you consider the last time we sold it," DuMouchelle told the Detroit Free Press. "It was before Donald had his show The Apprentice and obviously before he was running for president. Now, he’s running for president, while Marla just appeared on Dancing with the Stars. So it’s completely different time frames."

DuMouchelle described the ring as being "very wearable" and having a "pretty design."

Trump and Maples were married in 1993 in a lavish ceremony at the Plaza Hotel, with the guest list topping 1,000 people. They had one child together, daughter Tiffany, before splitting up in 1997. The divorce was finalized two years later.