The 92.15-carat "La Légende" — billed as the largest D-flawless, heart-shaped diamond ever seen at auction — set a new record at Christie's Geneva when it was scooped up by an anonymous buyer for $15 million.

The previous record-holder was a 56-carat heart-shaped stone that was sold at Christie's six years ago for $10.9 million. 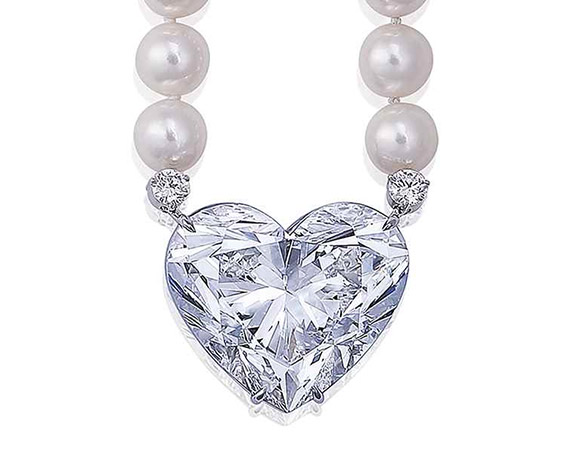 Described by Christie's as having excellent polish and symmetry, "La Légende" is the centerpiece of a cultured pearl necklace signed by Parisian jewelers Boehmer and Bassenge. "La Légende" (“The Legend”) is mounted in platinum and positioned between two round diamonds.

The Gemological Institute of America awarded "La Légende" a Type IIa rating. This is the purest type of diamond because it is composed solely of carbon with virtually no trace elements in the crystal lattice.

Christie's had placed the pre-sale estimate for the auction headliner at $14 million to $20 million.

Other auction highlights included a 15.03-carat ruby ring, which fetched $12.9 million, and a 7.97-carat fancy intense blue diamond that sold for $12.7 million.