In May 2014, a mammoth 17.4mm natural pearl stunned the auction world when it sold for $1.37 million, a price nearly seven times the pre-sale estimate. On October 29, Woolley & Wallis gets a chance to break its own record when it puts a 18.6mm natural pearl under the hammer at its Salisbury, England, headquarters. 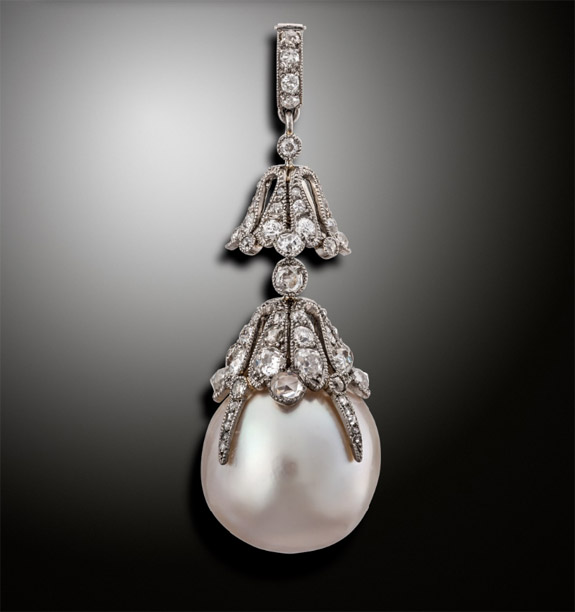 The slightly off-round, button-shaped saltwater pearl — which is currently set in a diamond-encrusted chandelier pendant — is one of the largest ever to come up for auction. Although it's only slightly more than 1mm larger than the current record holder, the contender weighs substantially more — 44.30 carats vs. 33.14 carats.

The Swiss Gemmological Institute described the pearl as having "an attractive slightly cream color with rosé and green overtones." It has a very fine pearl luster and smooth surface. The pearl measures exactly 17.45mm x 18.55mm x 18.65mm.

When the 17.4mm natural pearl was offered for sale last year, the auction house badly missed the mark with a pre-sale high estimate of $200,000.

There's a bit of mystery swirling around the upcoming auction headliner. As for its provenance, Woolley & Wallis could only say that the gem was from the early 20th century. No information was released about how long the current owner has possessed the pearl or from whom it was acquired. The current owner was simply identified as a "private international source," according to the Daily Mail.

The reason why a single natural pearl could be worth $1 million or more is because a gem of this type is nearly impossible to find. A natural pearl is created by a mollusk totally by chance, without human intervention.

A natural pearl forms when an irritant, such as a grain of sand, slips in between the mollusk's shell and its mantle tissue. To protect itself from the irritant, the mollusk secretes layer upon layer of nacre, which is the iridescent material that eventually produces a pearl. For a natural pearl to develop to 18mm in size would take 10 years or longer.

Cultured pearls, by comparison, are grown under controlled conditions, where a bead is implanted in the body of the mollusk to stimulate the secretion of nacre.