An $8 amateur diamond mining adventure could turn into a $1 million bonanza for Coloradan Bobbie Oskarson. 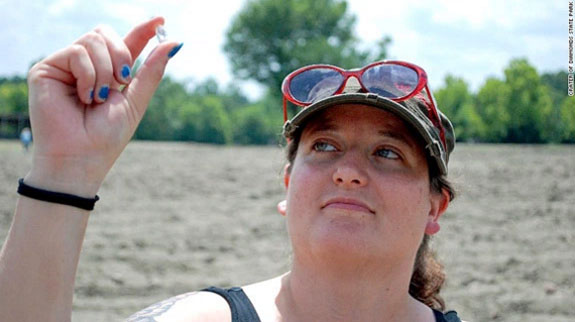 When Oskarson plucked an odd-shaped pebble from the dirt at Arkansas’ Crater of Diamonds State Park she could have never imagined that the stone might make international headlines, have its own Facebook page and sell eight months later for as much as $1 million. 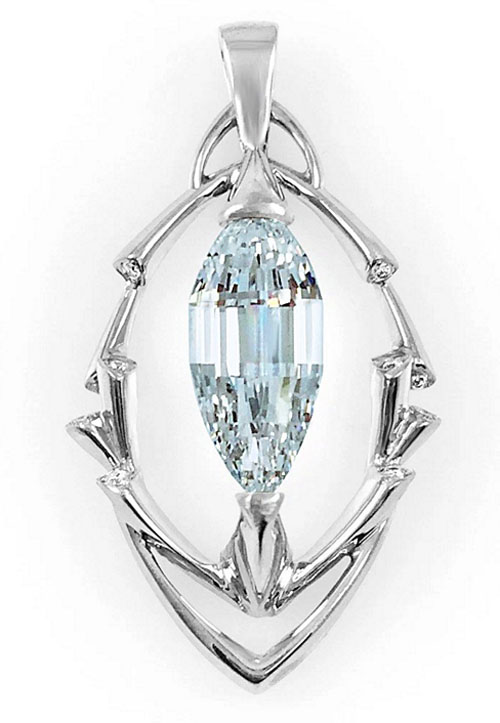 Originally 8.52 carats in weight and the shape of an icicle, “Esperanza” was transformed by Master Diamond Cutter Mike Botha into a unique 4.65-carat teardrop “triolette.” It possesses the highest possible grades for color (D) and clarity (IF – Internally Flawless). Today, the Esperanza (which means hope in Spanish) is billed as the most valuable diamond ever discovered in the U.S.

Botha’s 147-facet triolette is a shape of his own design. It resembles a teardrop and merges the elements of both emerald and trapezoid shapes. The diamond boasts 842 followers on Facebook.

Esperanza is set vertically in a stylish platinum pendant designed by Ian Douglas of The Inspired Collection, Wellington, New Zealand. The pendant is accented with 10 Canadian-sourced Sirius Star® diamonds and hangs from a diamond-adorned platinum chain.

After special appearances at jewelry stores in North Little Rock, Ark., Newport Beach, Calif., Phoenix, Houston and Jacksonville, Fla., the gem will be sold during an open bidding process that's set to end on February 15. The lucky winner will own a scintillating piece of Americana perfectly timed for gifting on President's Day.

Bids will be accepted in person at the Black, Starr & Frost retail locations in Newport Beach and Phoenix. Out-of-town bidders are encouraged to make inquiries to vice president/managing director Adam Graham at this email address: adam@blackstarrfrost.com.

Gem experts have had a hard time placing a value on Esperanza because there is nothing like it. It's a truly unique American treasure. While it's the fifth-largest diamond ever found at Crater of Diamonds, it is, by far, the most perfect in terms of color and clarity. It also boasts a totally unique cut. The process of cutting and polishing the stone took 130 painstaking hours.

Back on June 24, 2015, Oskarson of Longmont, Colo., had paid only $8 to do a bit of amateur mining at the park with her boyfriend and, within 20 minutes, came away with a gemstone that could fetch upwards of $1 million.

The park offers visitors the opportunity to search in the eroded surface of the eighth-largest, diamond-bearing deposit in the world. Any diamonds or semi-precious stones found in the 37 1/2-acre plowed field are theirs to keep.

As we edge toward February 15, it will be interesting to see if an Arkansan will win the bidding battle for Esperanza.

“It could easily be sold and sent off to Saudi Arabia,” Joan Ellison, a public information officer for the Arkansas Department of Parks & Tourism, told talkbusiness.net. “We have some people in Arkansas who have the means to step up and buy it so that it doesn’t leave our state.”