Jewelry buffs will remember the spring of 2016 as the "season of sensational blue diamonds." In a span of just six weeks, three museum-quality blue diamonds — all larger than 9.5 carats and each carrying a price tag of $25 million or more — will be making headlines around the world.

Yesterday. The first of the three, the 10.10-carat "De Beers Millennium Jewel 4," set an Asian auction record at Sotheby's Hong Kong yesterday. The $32 million selling price broke the record for the most expensive piece of jewelry ever sold at auction in Asia. It was scooped up by a phone bidder who chose to remain anonymous. The pre-sale estimate for the fancy vivid blue gem had been $30 to $36 million.

Slightly larger than an almond, the internally flawless oval diamond edged out the previous record holder, a 118-carat white diamond that fetched $30.6 million in 2013.

The De Beers Millennium Jewel 4 was originally unveiled by De Beers in 2000 as part of the Millennium Jewels Collection. While the priceless grouping was being displayed in London's Millennium Dome, a gang of thieves tried to steal the baubles in a daring raid that included a James-Bond-like escape down the Thames in a speedboat. Metropolitan Police foiled the heist and the bad guys were jailed for up to 18 years each.

Three superior blue gems appearing in one season is significant because gem experts believe that there are no more than a dozen or so fancy vivid blue diamonds over 10 carats in the world. 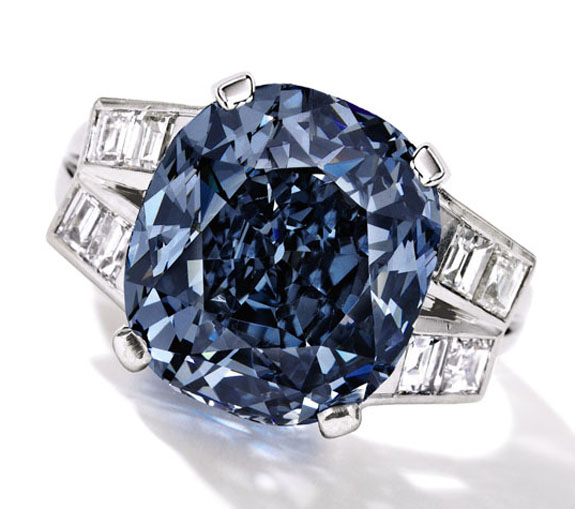 April 19. Next up in this spring's cavalcade of diamond delights will be the "Shirley Temple Blue," a gorgeous 9.54-carat fancy deep blue diamond ring purchased for the child star by her father in 1940. The cushion-cut diamond in its original Art Deco-inspired setting is expected to sell for $25 million to $35 million when it hits the auction block at Sotheby’s New York on April 19.

The “Shirley Temple Blue” carries a clarity grade of VVS2 and was rated “potentially internally flawless.” George Francis Temple paid $7,210 for the ring 76 years ago.

May 18. Next month at Christie's Geneva, the 14.62-carat rectangular-cut "Oppenheimer Blue" has a chance to surpass the record $48.5 million paid at Sotheby’s Geneva for the 12.03-carat cushion-shaped internally flawless “Blue Moon” (now called “Blue Moon of Josephine”). “Blue Moon” is the record holder for the highest price ever paid for a diamond of any color, and for the highest price paid per carat for any diamond ($4.02 million).

The Oppenheimer Blue, which boasts a VVS1 clarity, carries a pre-sale estimate of $38 million to $45 million and is the largest fancy vivid blue diamond ever offered at auction. Some experts believe Christie’s high estimate is on the conservative side, so the Blue Moon's record could be within reach.