Watch out, Graff Pink and Zoe! The 12.03-carat Blue Moon is looking to break your pricing records at Sotheby's Geneva on November 11. Sotheby's believes the internally flawless, fancy vivid blue diamond could sell for as much as $55 million, or $4.57 million per carat, when it hits the auction block at the Magnificent Jewels and Noble Jewels sale.

With Sotheby's pre-sale estimate set at $35 million to $55 million, it looks like the cushion-cut Blue Moon has a strong chance to make auction history. If the diamond sells for more than $40 million, it will break a record for the highest price ever paid per carat, which currently stands at $3.3 million.

If it exceeds the $46 million mark, it will break a second record for the highest price ever paid for any diamond of any color.

The current price-per-carat record holder is The Zoe Diamond, a 9.75-carat internally flawless vivid blue gem that was once part of the estate of Rachel "Bunny" Mellon. Back in November of 2014, a private collector from Hong Kong outbid seven suitors at Sotheby's New York to snatch the coveted diamond.

The Graff Pink currently owns the record for the highest price ever paid at auction for a diamond. Laurence Graff of Graff Diamonds won the 24.68-carat beauty at Sotheby's Geneva in 2010.

Among the largest known fancy vivid blue diamonds, the Blue Moon demonstrates the highest possible color grading for blue diamonds. Its name is a subtle reference to how often these extraordinary diamonds come along, as in “once in a blue moon.”

A GIA Monograph grading report described the hue of the diamond as “likely to have never before been seen within such a large diamond, or any gemstone.”

"The Blue Moon diamond is a simply sensational stone of perfect color and purity," David Bennett, worldwide chairman of Sotheby’s International Jewelry Division, said in a statement. “Blue, for me, is the most mysterious and magical of all the colors of diamond, and the Blue Moon will now take its place among the most famous gems in the world.” 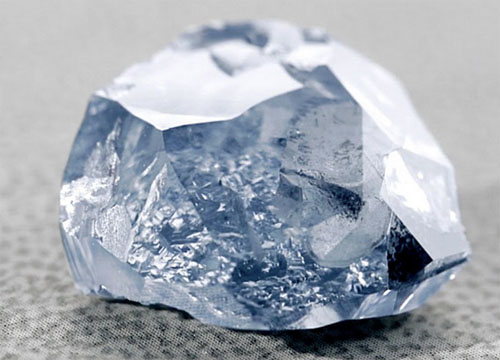 Blue diamonds get their color from trace amounts of boron in their chemical makeup. Colorless diamonds, by comparison, are pure carbon with no trace elements.

Unearthed in January by Petra Diamonds Ltd. at its legendary Cullinan mine in South Africa, the 29.6-carat rough was heralded at the time as “one of the most important blue diamonds ever recovered” by Petra chief executive Johan Dippenaar. In February, luxury jeweler Cora International purchased the rough gem for $25.6 million. Six months later, the company unveiled its 12.03-carat internally flawless cushion-cut blue masterpiece.