Unlock the value of your treasures with our remote buying program »

Named After A Perfume, 1,000-carat 'Most Precious' Aquamarine Resides At The Smithsonian

"Most Precious" is one of the world's most beautiful examples of March's official birthstone. Presented as part of the National Gem and Mineral collection at the Smithsonian's National Museum of Natural History in Washington, D.C., the rectangular-cut aquamarine from Brazil weighs a startling 1,000-carats and evokes the clear blue hue of a tranquil sea.

A gift of Dr. W. Langer and Evyan Perfumes, Inc., "Most Precious" takes its name from the perfume that was launched by the design house of Evyan in 1958.

The colossal aquamarine has some handsome company in the Janet Annenberg Hooker Hall of Geology, Gems, and Minerals. Among her neighbors are a pantheon of world-famous gems, including the Hope Diamond, Logan Sapphire and Rosser Reeves Star Ruby.

Aquamarine is the sea-blue variety of the mineral beryl, whose family members include emerald (intense green) and morganite (pink to orange-pink). Aquamarines can range in color from light blue to pure blue to shades of greenish-blue. The variations in blue color are dependent on trace amounts of iron in the gemstone's chemical composition. 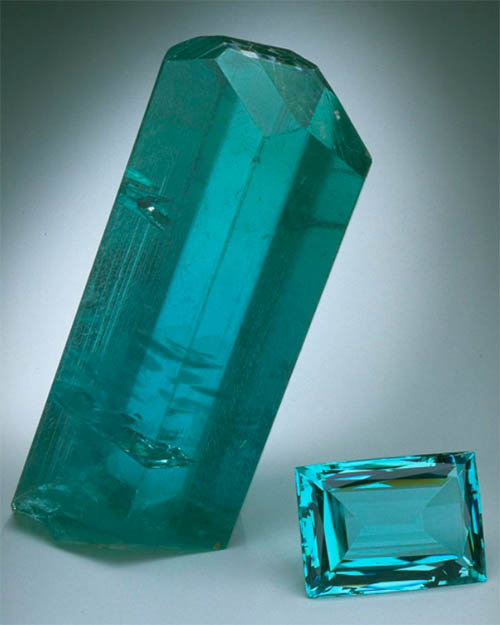 In the photo above, "Most Precious" is shown alongside a near-perfect aquamarine crystal that weighs 15,256 carats (6.7 lbs).

Beryl rates 7.5 to 8 on the Mohs hardness scale, making it suitable for fine jewelry.

Aquamarine is a symbol of youth, hope, health and fidelity. Legend states that Neptune, the Roman Sea God, gifted aquamarines to the mermaids, thus bringing love to all who have owned it.

Aquamarines are mined in many countries, including Nigeria, Madagascar, Zambia, Pakistan, Mozambique and the U.S., but most of the finest-quality gemstones still come from Brazil.