Emblazoned with 394 hand-set diamonds weighing a total of 9.25 carats, the eye-popping Pittsburgh Penguins 2017 Stanley Cup ring commemorates the team's impressive back-to-back championships. It was the first time in 19 years that a National Hockey League team has accomplished that feat. 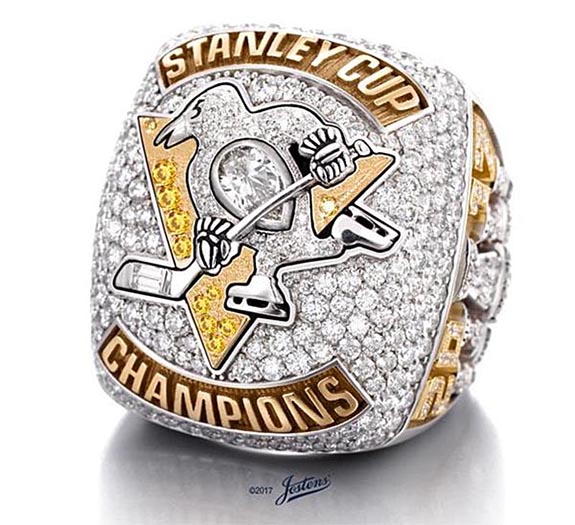 The face of the ring features the iconic Penguins logo rendered in diamonds atop a 14-karat yellow gold triangle set with 10 canary yellow diamonds. Mounted on the penguin's torso is a .75-carat pear-shaped white diamond, and on the blade of its hockey stick is a baguette-shaped diamond. The number "5" creates the eye of the penguin, a subtle nod to the team's five Stanley Cups. Above and below the skating penguin are the words STANLEY CUP and CHAMPIONS in raised 14-karat yellow gold letters on a yellow gold background.

The layering of the yellow and white elements give the ring a three-dimensional appearance.

Of the ring's nearly 400 diamonds, 199 of them are used on the face of the ring to accomplish a full-domed waterfall effect, making for smooth, cascading edges.

The right side of the ring features the year “2017” set with 23 pavé diamonds. Just below are five white gold Stanley Cups, each marked with the year of the championship.

The left side of the ring has the recipient’s name and number. Framing the number are two Stanley Cups, each adorned in pavé-set diamonds. Tucked under the number is a banner that reads “BACK 2 BACK.”

The interior of the band is engraved with the team's motto, “PLAY THE RIGHT WAY,” as well as the record of the four playoff series and the logos of the opponents the Penguins defeated on the way to the championship.

National Jeweler reported that Penguins players with three Stanley Cup wins got three extra diamonds on the back side of their rings. Hall of Famer Mario Lemeiux's ring has five extra diamonds, representing the two Cups he won as a player and the three he's won as an owner.

Jostens noted that the Penguins' rings represent the first time a championship ring has been crafted using a special technique that allowed for the insertion of solid 14-karat yellow gold panels on each side.

The players, coaches and staff received their rings in a private ceremony on Monday at the the Carnegie Museum of Art in Pittsburgh.

“It always is a very special day, and a dream come true, for an NHL player, coach or staff member to receive a Stanley Cup ring,” said David Morehouse, president and CEO of the Penguins. “We want to thank everyone at Jostens for doing a great job in creating this phenomenal ring to honor our back-to-back Stanley Cup champions. We are proud of what they accomplished and proud of what they mean to our city. The ring is a lasting tribute to their season of excellence.”