Less than five months after "Blue Moon" shattered the record for the world's priciest diamond, another "rare and superb" blue diamond — the "De Beers Millennium Jewel 4" — will be looking to make its own headlines at Sotheby's Hong Kong in April. 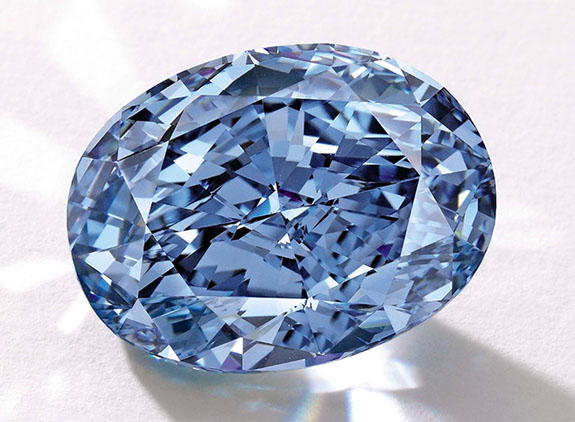 Described as internally flawless and weighing 10.10 carats, the oval-shaped fancy vivid blue "De Beers Millennium Jewel 4" is expected to fetch between $30 million and $35 million when it hits the auction block on April 5. Slightly larger than an almond, it's the largest oval fancy vivid blue diamond ever to appear at auction.

If the gem achieves its high estimate, it will become the highest priced diamond ever sold in Hong Kong. The current record holder is a 118-carat white diamond that fetched $30.6 million in 2013.

It's almost certain the "De Beers Millennium Jewel 4" will not surpass the $48.5 million paid at Sotheby's Geneva for the 12.03-carat cushion-shaped internally flawless "Blue Moon" (now called "Blue Moon of Josephine"). "Blue Moon" is the record holder for the highest price ever paid for a diamond of any color, and for the highest price paid per carat for any diamond ($4.02 million). Hong Kong billionaire Joseph Lau purchased the stone to honor his 7-year-old daughter, Josephine.

“The market for colored diamonds has gone from strength to strength," said Chin Yeow Quek, deputy chairman of Sotheby’s Asia. "Fifteen years ago I had the great opportunity of seeing this magnificent stone for the first time and it is an absolute delight now to have it in one’s hand, to admire it again and to offer it for auction in Asia. This beautiful blue stone — combining Nature’s rare beauty, superlative color, unusual shape and illustrious provenance — offers yet another wonderful collecting opportunity for connoisseurs worldwide.”

The vibrant blue stone was sourced at South Africa's Cullinan Mine and gets its blue color from boron impurities in the chemical makeup of the diamond. Blue diamonds are extraordinarily rare and typically yield the highest prices at auction. Yeow told AFP that there are no more than a dozen or so fancy vivid blue diamonds over 10 carats in the world.

Sotheby's regularly handles its highest-profile gemstones like rock stars and this one is no exception. The "De Beers Millennium Jewel 4" will be touring New York, London, Geneva, Singapore, Taipei and Hong Kong in a high-profile campaign leading up to the auction, which will take place at the Hong Kong Convention and Exhibition Centre.