Back in November of 2015, Canada-based Lucara enjoyed an uncanny stroke of good luck when its workers discovered two enormous gem-quality rough diamonds at its Karowe Mine in Botswana. The pair tipped the scales at a combined 1,922 carats — or just shy of a 14 ounces. 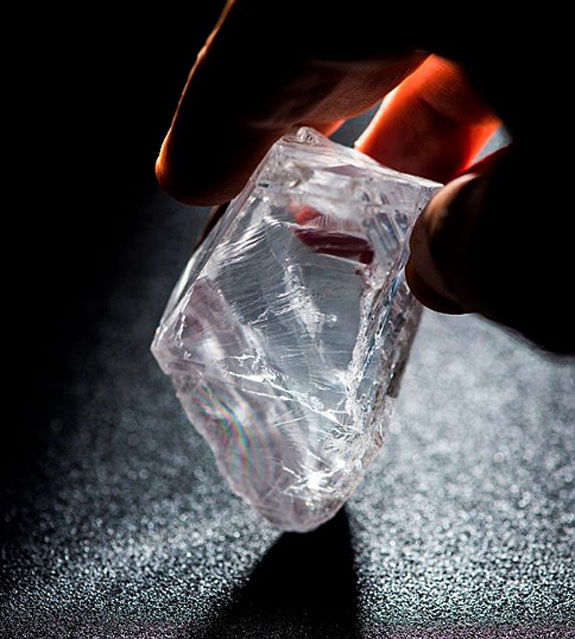 The larger of the two — the 1,109-carat Lesedi la Rona — will be offered for sale at Sotheby's London on June 29. The smaller of the two — The Constellation — just set a record when the 813-carat gem was purchased by Dubai-based Nemesis International for $63.1 million. It was the highest price ever paid for a rough diamond.

Both diamonds have been rated Type IIa by the Gemological Institute of America. Diamonds in this rare and coveted subgroup are chemically pure and often show extraordinary optical transparency.

As part of the deal with Nemesis International, Lucara retained a 10% interest in the net profit from the sale of the faceted diamond (or diamonds) The Constellation will yield after cutting and polishing.

Lesedi la Rona is being billed by Sotheby's as "The Diamond of a Lifetime" because it's the biggest rough diamond to be unearthed in more than a century. Only the 3,016-carat Cullinan Diamond, discovered in 1905, was larger. The Constellation, at 813 carats, is the sixth largest gem-quality rough diamond ever found, according to NationalJeweler.com.

It's hard to imagine how improbable it was for Lucara to secure two such extraordinary diamonds within days of each other in the same area of a single diamond mine — in this case, the south lobe of the Karowe Mine.